TWENTY NINE PALMS, CA –- On a recent morning, I waited more than 20 minutes to enter Joshua Tree National Park, behind a line of vehicles spewing pollution into the air from their tailpipes. Those emissions contribute directly to climate change, our parks’ most existential threat. Reducing those emissions, via a major and rapid shift to electric vehicles, is one of our best hopes at avoiding the worst impacts of the climate crisis.

But the National Park Service itself acknowledges it doesn’t currently have the infrastructure to handle a major transition to EVs. Fixing that won’t be easy.

President Biden has set an ambitious goal of constructing 500,000 individual chargers across the country by 2030. Importantly, a major focus of the National Electric Vehicle Infrastructure Formula Program (NEVI) is to strategically locate charging stations along “designed Alternative Fuel Corridors, particularly along the Interstate Highway System,” a Federal Highway Administration spokesperson said in a statement to the Traveler. The program is just getting off the ground, though, and it’s too early to tell how successful it will be.

For the sake of the parks, it needs to be successful.

“One of our biggest challenges comes with infrastructure in the park for charging stations,” Joshua Tree Superintendent David Smith explained to the Traveler from his office at park headquarters. “It’s no problem to come up from Palm Springs for the day” –- he pointed to the map on his wall -– but visitors need to make sure they start with a full charge if they are coming from the more remote side of the park.

Ashley McEvoy, senior manager of resilience and sustainability at the National Park Foundation expanded on what makes building charging infrastructure at parks so complicated: “The biggest challenges relate to what makes national parks so special in the first place -– how different they can be. Each park has its own specific needs, and … many parks are in remote locations and power supply can be a challenge.”

Reducing emissions from visitors is, of course, the biggest benefit of EVs. But park operations also matter, and EVs pose a different set of challenges on that front.

Joshua Tree currently has about 62 “fleet vehicles,” only one of which is electric. But, the park has a goal to “convert every vehicle we can” to electric by 2030, said Smith. “We can” is an important caveat -– the technology just isn’t there yet for electric vehicles to do everything the park could need, particularly around emergency response.

“It’s mostly a range thing and a little bit of a 4-wheel-drive and clearance thing. The vehicles that are out there right now don’t seem to have that, which we really need in some of these sandy areas,” explained Eric Linaris, Joshua Tree’s chief ranger.

Sitting in his office, Smith laid out how he sees it for Joshua Tree. “We are not the 3.1 million people who visit every year,” he said. “We’re a staff of about 120,” and that’s all they have the capacity to handle. Joshua Tree’s role, the superintendent continued, is to “set the tone” for the public.

“We have the capacity to be net-zero” in the next couple of years and that’s an important example for the public, said Smith. “They know we’re trying to walk-the-talk.” 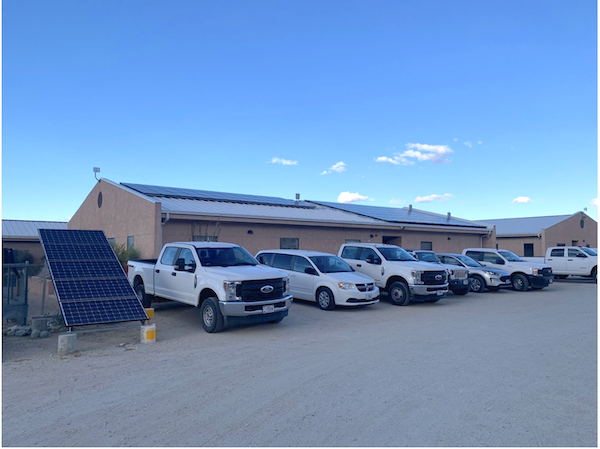 To understand the issues other parks are grappling with when it comes to EVs,  the Traveler reached out to Shawn Norton, the Park Service’s lead program manager for sustainable operations. Norton did not respond, though, and the Park Service’s public affairs staff said, without directly addressing the question in any detail, that the agency “recognizes the importance of reducing greenhouse gas emissions and strives to utilize efficient and alternative transportation operations in as many parks as possible.”

Adapting all 423 national park units for an EV world is no doubt a major challenge. However, according to internal documents obtained by the Traveler, the Park Service is moving to assemble a task force to “oversee the service-wide electrification of our fleet.” While clearly still early — one question outlined is whether the Park Service should lease “a majority of the fleet” to allow for easier vehicle upgrades as EV technology improves –- the documents point to funding as a major hurdle parks must overcome.

But there are many other issues. What resource and regulatory hurdles (e.g., archaeological or environmental) would have to be cleared to bring in the power needed to support chargers? Is the needed power available through gateway communities? Will individual parks be responsible for contracting for chargers, or will a national contract be engineered by the Park Service? Where will the funding come from to pay for not just the installations, but the replacement of park fleets with EVs? Should the Park Service concentrate initially on installing EV chargers before replacing its fleets?

Diego Lopez,  executive director of Northern Colorado Clean Cities (NCCC), said his group has been working with Rocky Mountain National Park for years to install charging stations in and around the park, as well as providing the park with electric fleet vehicles. Still, the park only has a handful of charging stations because of its remoteness and the fact that the “cost of electricity in rural areas is higher than urban areas,” Lopez said, as is the “cost to transport the materials” for station construction. One way NCCC has been working around this problem is by helping gateway communities, like Estes Park, Colorado, build out more of its EV infrastructure.

Though in its infancy, California’s Pacific Gas & Electric’s “Community Microgrid Enablement Program” has the potential to be useful for parks. Microgrids are self-sustaining power grids that run on renewable energy, like solar. They can be built almost anywhere and have the added benefit of allowing the utility to avoid costly and dangerous overhead power lines which, especially in California, have caused tremendously destructive wildfires.

The idea of independent microgrids seems to fit perfectly with the Park Service’s needs, especially at a remote location such as Joshua Tree. Why not use already disturbed land — like parking lots -–and build sun shades (as solar panels on parking lots are often called) that act as EV chargers?

Ken Gillingham, professor of Environmental & Energy Economics at the Yale School of the Environment, says the idea could work in some parks, but not everywhere. “I think that approach would be expensive relative to just bringing out more capacity and further lines (at least at today’s costs), but very possible, at least for some parks.”

Joshua Tree recently acquired several hundred solar panels and “I’ve challenged our building foreman to look at our parking lots and see if shade structures are feasible and if that’s something we can support,” Smith said. “You get the benefit of cooling off cars and using an already disturbed area.”

The challenge of using many small distributed areas like parking lots is that “power is designed to flow from big power plants down to our houses,” as Destinie Nock, assistant professor of engineering and public policy at Carnegie Mellon, explained to CNBC last January. “That one way direction has really limited our transition to more renewables and their storage.” 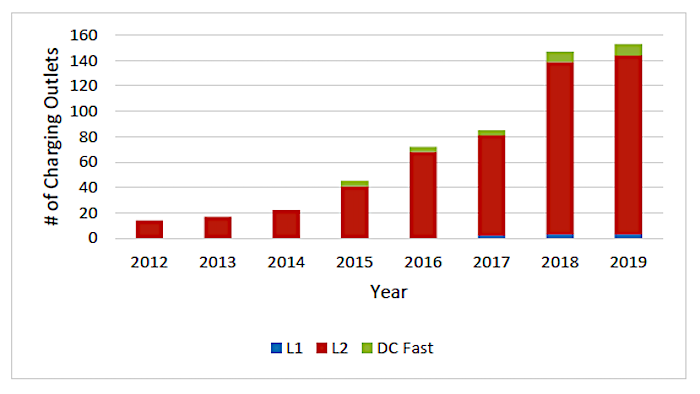 Since 2010, the NPS has worked to offer electric vehicle charging as an amenity for park visitors. These efforts have been achieved through partnerships with entities such as the National Renewable Energy Laboratory, DOE’s Vehicle Technologies Office, BMW, and the California Energy Commission. The chart above illustrates the increase in public and private (i.e., workplace and fleet) charging availability in National Parks between 2012 and 2019.–NPS

Because of that limitation, it may be the case that one of the best ways to save Joshua Tree National Park is to kill Joshua trees, depending on who you ask. A fight has been brewing for years just outside the boundaries of the park as developers seek to build massive solar farms that can generate enough power for entire cities. But doing so requires, euphemistically, “displacing” the iconic trees and disrupting the desert ecosystem.

In fact, the Biden administration just approved two massive solar projects on U.S. Bureau of Land Management land in Riverside County nearby Joshua Tree. And a few years ago a major dispute played out over the Palen Solar Project, which would power nearly 20,000 homes but also displace Joshua trees and endanger many of the plants and animals that live in the Mojave Desert.

At the time, Brendan Cummings, conservation director for the Center for Biological Diversity, told the L.A. Times that “If you have to mow down hundreds, perhaps thousands, of climate-threatened trees, and disturb carbon-sequestering soils, to build your climate-friendly project, that’s a pretty good indication you’ve put it in the wrong place.”

“The desert is now plowed up, and the habitats have been destroyed, the ecosystems have been destroyed,” Patricia Robles, chair of the Lacuna de Aztlan Sacred Sites Protection Circle, a Native American group, argued during a hearing at Palm Springs City Hall in 2016. “The desert bioregion is a very important region to the world and it is very hard to restore. You will never see the desert the way it was prior to the destruction.”

But given the existential scale of the climate crisis, others urge speed, even if that means surrendering part of the desert. “We’ll Have to Sacrifice Joshua Trees to Save Them” was the headline of an October essay in the L.A. Times, written by two biologists and an ecologist.

The Department of Energy, for its part, recommends erecting solar panels in both cities and rural areas. 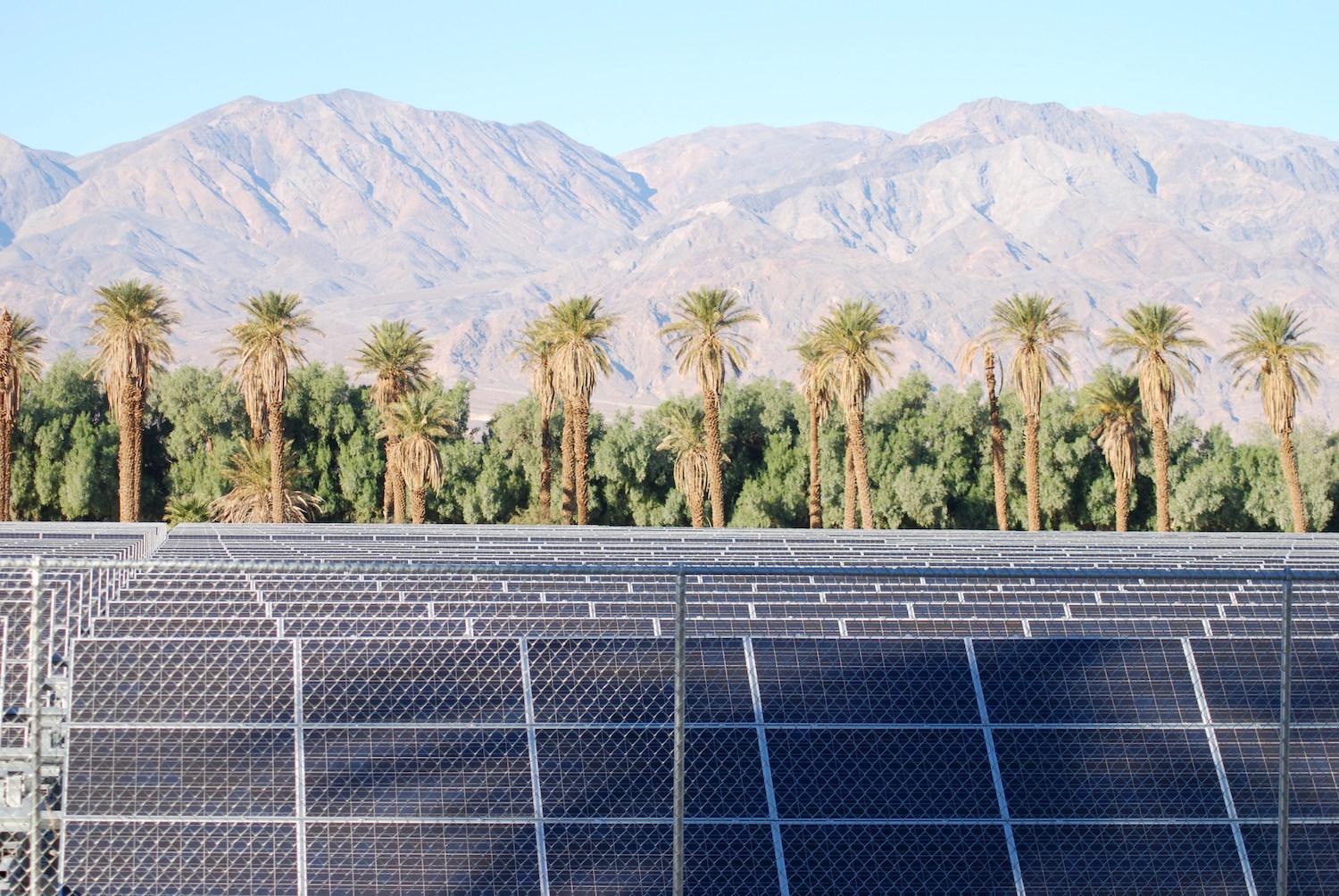 Asked if the desert habitat of Joshua trees was an appropriate place to build massive solar farms, Smith offered a nuanced take: “Anything we can do to reduce the amount of carbon emitted, we’re generally supportive of, but we also acknowledge there’s an appropriate place for energy development and there are some places that are inappropriate.”

“Inside of a national park. To create a large solar array in a place that is so meaningful to the American public is not appropriate … but given how big California is and our demand for energy, there are places that are appropriate.”

There is no obviously correct answer for how to support EVs in parks. The climate crisis is a complex problem that requires complex solutions. As Smith, who drives a Tesla himself, mused, “These are some super big challenges. Given the prospect of climate change destroying Joshua Tree and other national parks, land managers and all of us are going to have to decide: there are going to be some sacrifices, is this an appropriate sacrifice?”

You can find a list of parks with EV chargers by reading this story.

This article was made possible in part by the readers and listeners who support National Parks Traveler, a small, editorially independent 501(c)(3) nonprofit media organization. The Traveler is not part of the federal government nor a corporate subsidiary. Your support helps ensure the Traveler’s news and feature coverage of national parks and protected areas endures.

Residents of the following states may obtain a copy of our financial and additional information as stated below:

E-cars in remote, fragile parks is like a square peg in a round hole.  It will be decades before the technology can handle the needs of police, fire and EMS vehicles which must be able to run continuously for hours; sometimes days.  I’m not sure Elon Musk has even envisioned a battery that can power a fire engine w/ all its pumps for 8 hours.  You want someone rescuing you in a remote part of a park to be worrying about running out of car battery?

You’re actually discussing cutting down trees in or around a park to build solar panels?  Let’s come up with cures that don’t kill the patient.

Has the conversation moved from e-buses and shuttle systems to building “green” infrastructure in/around the parks?